Wanting to abolish hierarchy is naive

Wanting to abolish hierarchy is naive: this is translation of an earlier Blog in Dutch language of June 2020. 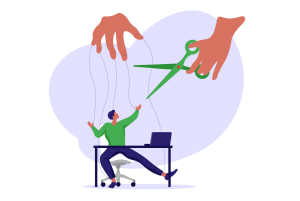 I am a big fan of progressive organizations and still it’s needed to highlight the pluses and minuses of the new future-proof organization. Let’s talk about one of the most cursed and at the same time persistent phenomena: hierarchy. Supporters of the progressive organization often find it a reprehensible phenomenon, which we should put with the waste of the industrial revolution. Are they right?

In traditional organizations, power is clearly divided from top to bottom. You climb a ladder to rise up, your business org chart shows where you stand in the organization and what your status and position of power are. The criticism is that people in this structure cannot develop their talents sufficiently and that opportunities and resources are unfairly distributed.

A substantial part of my career I was a co-owner working in an organization which was organized along 15 processes; we had no management team, no ‘rake’ structure, no departments and no traditional job descriptions. Yet there was a hierarchy: a dynamic hierarchy. The decision-making authority per process (Facilities, Customer Relationship, Finance, People etc) was assigned to the employee who fulfills – what we called – an Act role (based on Deming’s PDCA cycle). Every single employee however fulfills several roles. For example, one employee can operate in an Act role (leading role) in the Process Customer Relations and at the same time in a Plan or Do role in the Process Facilities. So hierarchy changes continuously depending on the context.

From static to dynamic

Hierarchy provides guidance, structure and clarity; everyone knows who decides. That is where the crux lies and the solution. Because when you transform a static hierarchy into a dynamic one, you can choose how you are going to distribute power. Then you say goodbye to power distribution based on seniority or who is clever in climbing a ladder – often the same one who is good at corporate political games.

Instead, there is a hierarchy in which power shifts based on knowledge, competences and experience within a specific context.

Denying or abolishing hierarchy is a “bit stupid,” but redefining and implementing it can certainly help realize the goals of the progressive organization.

That’s why I am proud that my partners and I founded Myna, to honor the progressive organization, based on the self-organizing principles of swarming and where fluid structure meets solid growth.

Wanting to abolish hierarchy is naive